Grounds for Sculpture is a forty-two acre sculpture garden and arboretum on the former site of the New Jersey State Fairgrounds. Founded by Seward Johnson to promote the understanding and appreciation of contemporary sculptures, the park has been enchanting visitors since 1992.  A number of Johnson’s tableaus are based on well-known nineteenth-century paintings and are on view throughout the Grounds. His life-sized three-dimensional works based on well-known paintings “allow an intimacy with the paintings that the paintings don’t allow themselves.” You will no doubt be enchanted and surprised by the sculptures. Enjoy a guided tour of some of the many sculptures and then visit the museum galleries with rotating exhibits. Lunch at the historic Nassau Inn, located in Princeton, NJ followed by a guided motorcoach tour of this University city which will cover James Madison, TS Eliot, F. Scott Fitzgerald and more, not to mention Revolutionary War Sites. This is a very special tour and we hope you will join us.

Departure from Independence (near Millsboro), Newark Senior Center and Brandywine Park ‘N Ride in the early morning and return in the early evening.

TOUR INCLUSIONS: Roundtrip transportation from Independence, Newark and Wilmington* admission to the Grounds for Sculpture * guided tour (1 guide for every 12 persons) at the Grounds for Sculpture * lunch at the Nassau Inn, Princeton * guided motorcoach tour of Princeton, NJ * taxes and gratuities for included lunch, guides and motorcoach driver * services of a Tour Director from 4 Seasons Tours *

Full payment is due no later than March 30, 2022.
Cancellations: After final payment date, no refunds unless replaced by another passenger.

Responsibility: B & B Travel Inc., d/b/a 4 Seasons Tours and Travel, acts only as agent for suppliers in arranging transportation and all other services included in this tour. 4 Seasons Tours and is not liable for loss, damage, injury, death or expense on account of delay, failure or accident of any conveyance or service or from any cause whatsoever, whether or not due to or caused by negligence of any company or person. No refunds for any unused portion of the tour.

To make your reservation(s) for this tour, click here for a printable form. 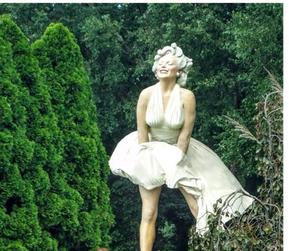